Solomon Ports is continuing its ongoing improvement of the domestic terminal at the Honiara Port, Point Cruz.

Earlier this month a ground-breaking ceremony was held to mark the commencement of construction of four new jetties, which is just next to the Kwalemanu jetty, right behind the Hyundai Mall.

Work on the first Jetty has now commenced, with our engineering team now currently doing sheet piling and land reclamation works on site. The new jetties will be 50 meters in length and 12 meters in width, which is larger than the existing jetties.

This is to better facilitate the number of vessels using the domestic terminal.

SIPA Chief Engineer Ronald Ivupitu said the sizes of domestic ships using the domestic jetties are getting larger every year, with the current one measuring 63 meters.

He said the idea of increasing the size of the jetties was to allow more maneuverability for both vessels, and port users during ship operations.

“The existing jetties are a bit narrow, but the new jetties will be wider, which can allow two vehicles to enter at the same time”, he said.

“This will allow faster loading and unloading so that ships can leave quickly, which will save time as well.” 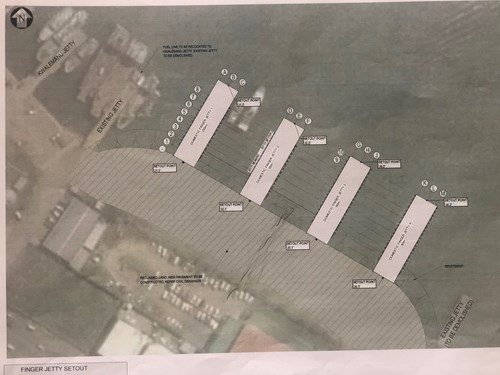 The proposed new domestic jetties’ access will include paved roads with proper sufficient car parks as well as resting areas for passengers, as well as specialised parking areas for individuals with disabilities.

Other road furniture will also be included such as road crossings, resting benches, streetlights, and plants.

The jetty under construction is self-funded by SIPA, and will cost SBD$28 Million, which includes the onshore developments.

Other works and repairs on existing jetties are also underway, these are mainly to replace the fenders and bollards. Construction on the first jetty and onshore features will last eight to ten months, meaning the new jetty is expected be completed and commissioned in mid-2022.

SIPA is continuing with the domestic terminal upgrades with the aim of improving port facilities and services to port users traveling out to the islands.