Solomon Ports’ ‘Green Ports Initiative’ has been shortlisted among 126 countries to compete in the final round of the ‘5th Global Entreps Awards’.

The 5th Global Entreps Awards & 5Gcitizens International Congress will begin at the 75th General Assembly of the United Nations in New York in September 2020, running beyond.

From 25th September 2020 to 31st January 2021, Entreps, the United Nations, 1,000 Global Jurors, and several international partners will be launching events all over the world making real these 5th editions of the International Congress and Global Awards.

For this 5th edition, will target each of the 17 SDGs by the United Nations, key technologies such as AI or 5G for Sustainability, Responsible Business Undertaking and Good Governance, in 126 countries.

Earlier this year Solomon Ports became the only Port in the Pacific Region to be selected as a finalist of the International Association of Ports and Habours (IAPH) World Ports Sustainability Program (WPSP) for the Green Port Project.

The Aim of the ‘Green port initiative’ is to reduce carbon emissions in ports operations, which is a global challenge for the maritime industry and transport sector, both in the region and around the world. 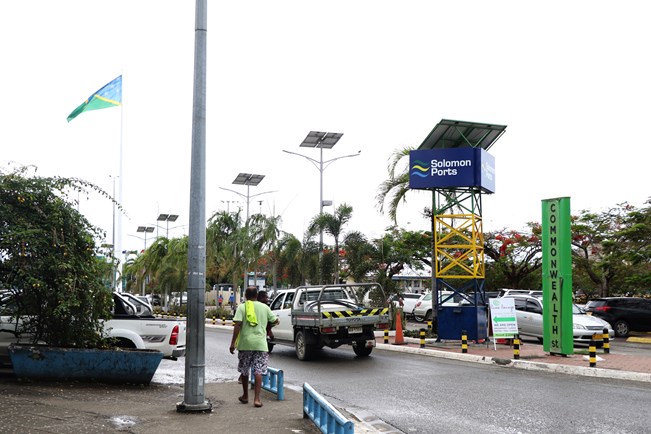 Image: Solar Poles installed at Commonwealth Street in the heart of Honiara's CBD.

The Port has so far invested in an SBD$15 Million-dollar LED light poles in 2019, and solar lighting poles for both the Port of Honiara and Noro.

This has seen the reduction in cost and usage of energy (Electricity), and the overall reduction in carbon emissions discharged from Port Operations.

As part of the project , new trees , palm trees and flowers have been planted in and around the port area to not only beautify the port , but to absorb and reduce carbon and other harmful gases emitted from port operations.

Solar Poles have also been installed in Solomon Port’s staff houses and have been donated and installed at the famous commonwealth street in the heart of the capital city Honiara, as a gesture of giving back to the people of Solomon Islands and providing light for members of the public.

With this recognition, Solomon Ports strives to become a leader in the fight against climate change in the Pacific, and in promoting the usage of Green Sustainable energy in port operations.